We {heart} our freighter fans!

In every kind of weather and at all hours of the day and night, these diehard self-professed boat nerds wave us in and out of ports around the Great Lakes and from the vast and varied shorelines along the way.

The love people have for freighters and our Great Lakes is a special thing and one we strive to foster. In that spirit, we’ve created this regular feature called #SaturdaySalute that will appear on social media and on our website at www.interlake-steamship.com

If you know someone who is deserving or you want to share your own story, please message us a little about you and your love of freighters and the Great Lakes. We’re looking forward to getting to know you. 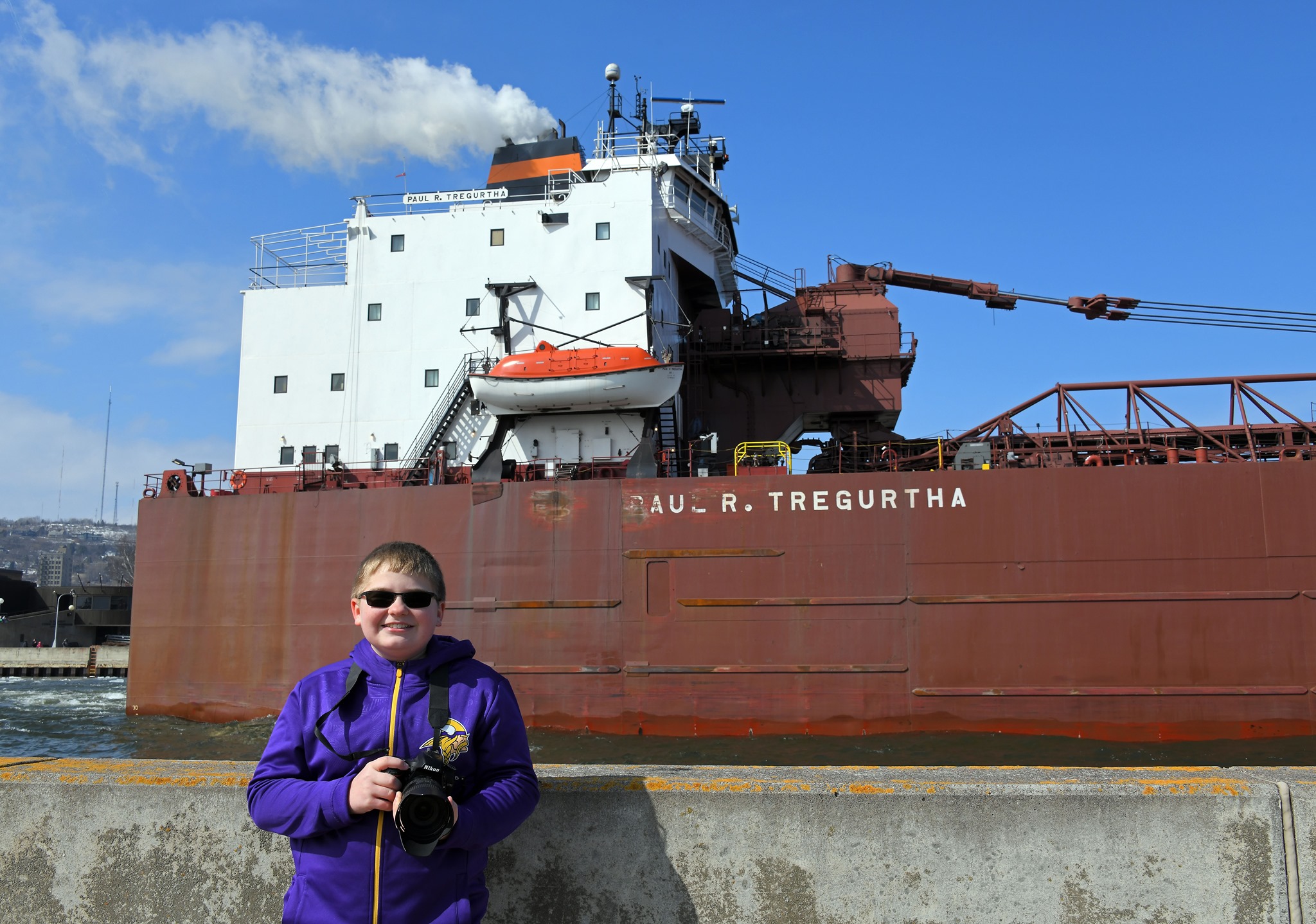 Gus Schauer has been photographing Lakers for half of his life, seven years to be exact.

The 14-year-old from Duluth, Minnesota, is easily one of the most talented shutterbugs on the North Shore regularly capturing spectacular shots and enviable vantage points of the boats that sail in and out of the Twin Ports.

“My dad would bring me down to the Canal a few times, and once I started hearing those ship salutes, I immediately got hooked,” says Gus, who is in eighth grade at Stella Maris Academy in Duluth. “I like when the bridge responds and then all the people get excited when they hear it. I just think that's a cool tradition that's kept on the lakes throughout the years.”

He has continually upgraded his skills and equipment since then, following in the photography footsteps of his dad and boat-and train-chasing buddy David Schauer.

“Then I had this little camera that I would bring with me and I started taking some pictures,” Gus says. He now shoots with a D750 Nikon. The pair also flies a Mavic 2 Zoom drone to catch unbeatable aerial shots.

Gus’s pictures are always big hits on Facebook and have been featured in the North Star Port, Duluth Seaway Port Authority’s quarterly magazine. 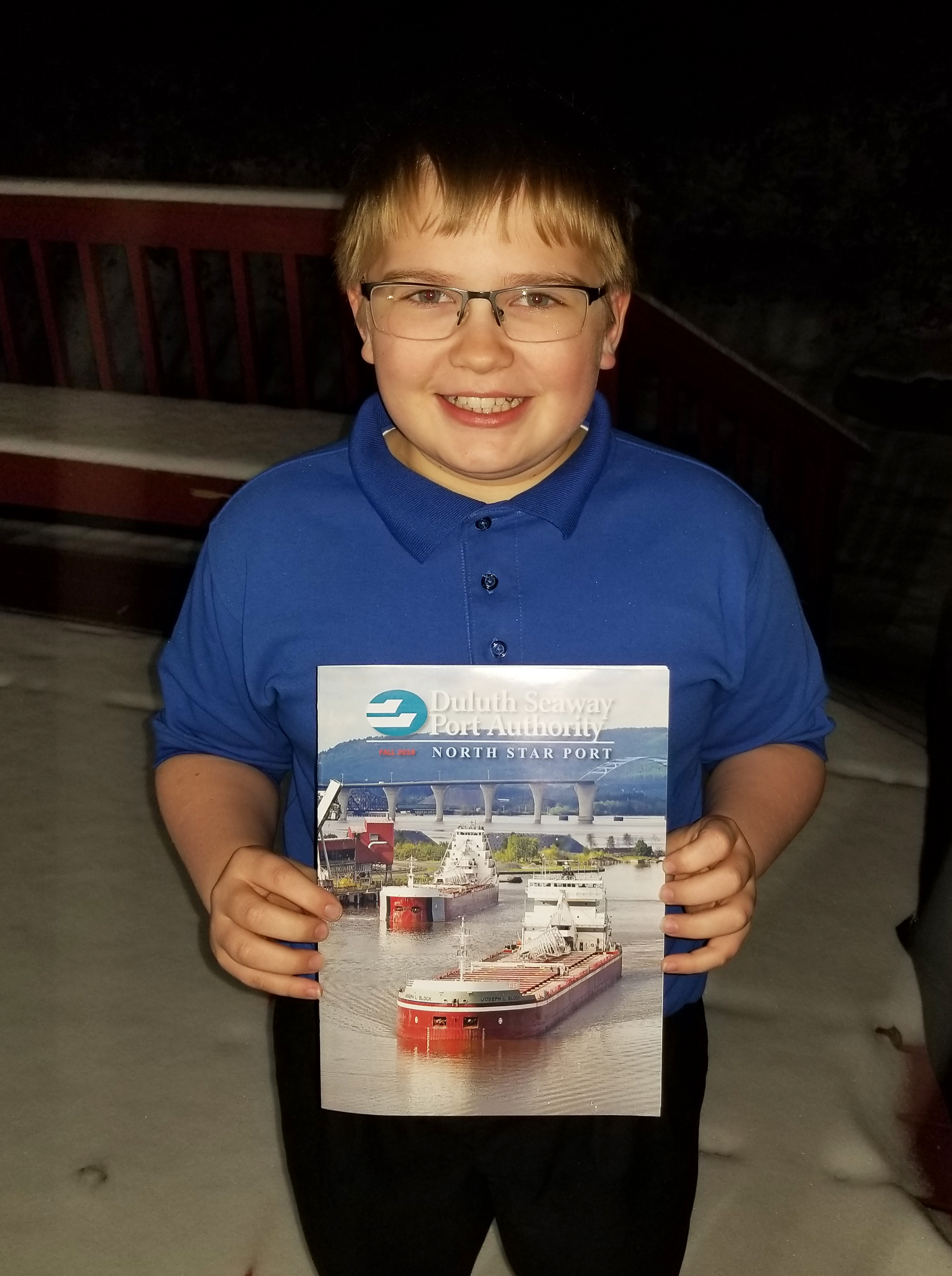 Here’s more of our recent chat with Gus, who talked to us this week while he was in position to get photos of our M/V Paul R. Tregurtha as she departed the CN Duluth dock with her first load of iron ore of the season.

Gus: Yes, well, actually my birthday is March 28. If I get a ship on my birthday, that's pretty exciting.

Do you have any favorite boats? They don't have to be Interlake boats.

Gus:    Yeah, my favorite boat is the CSL Oakglen, it's a Seaway class boat. My favorite Interlake boat is the Lee A. Tregurtha. I like the old design of her and that in World War II she was a tanker. I think that's so cool.

What's your favorite place to shoot from?

Gus:    My favorite place is probably the Canal because of the ship salutes. 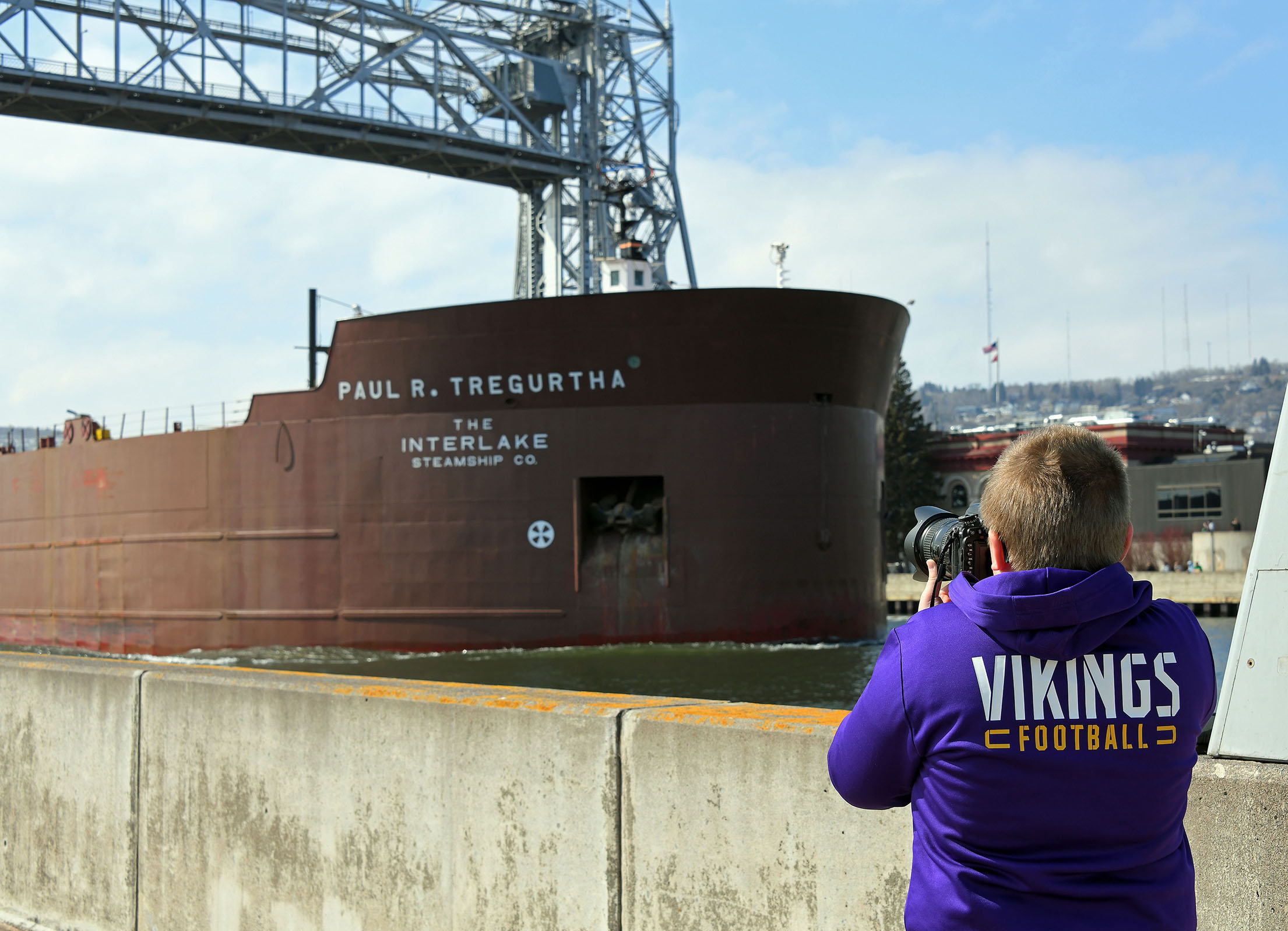 Where do you and your dad normally go to shoot, and do you do it at all different times of day?

Gus:    Yeah, it could be at any time of day. We usually shoot Duluth-Superior, but we'll occasionally travel to take some shots.

You said you just started shooting with the drone last summer. What do you like about it?

Gus:    We wanted to get different angles that you just could not get on the ground, and we thought the drone has a lot of flexibility which would be cool to take boat pictures. 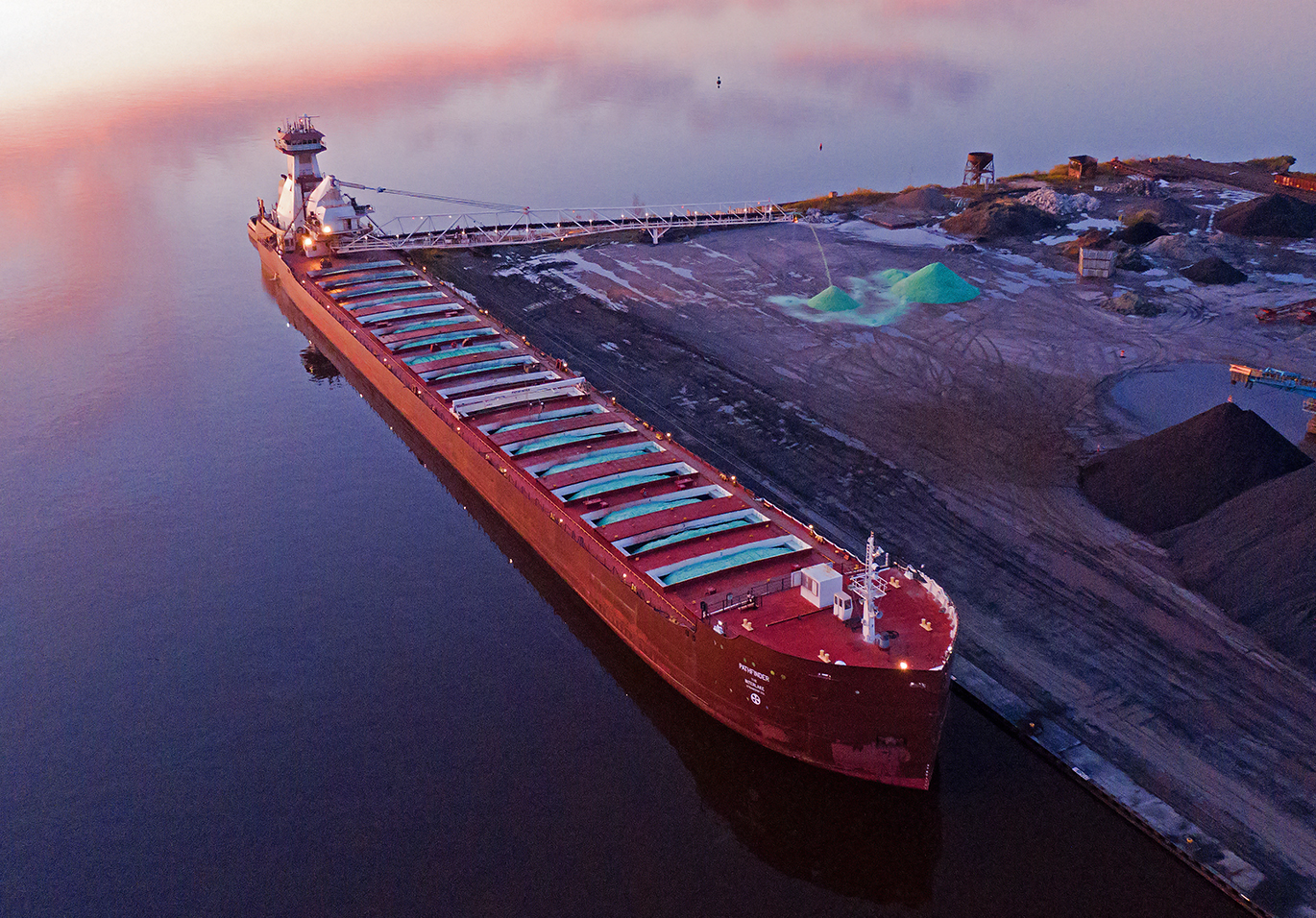 When you're getting your drone shots, where are you going and what kind of precautions do you have to take with that?

Gus:    We take precautions of, where the airports are and what the weather is like. If it's raining or super windy, we won't fly it. We don’t fly directly over boats, structures, or people. We fly mainly over open water.

How often would you say you're out shooting during the season?

Gus:    We shoot almost every day. Not every day during the season, but at least quite a few times a week. We follow the MarineTraffic app and Harbor Lookout for Duluth.

What does your mom think of all this?

Gus:    She thinks we're kind of crazy for always going out and taking pictures, but she likes the enthusiasm.

You'll go out in all kinds of weather too, right?

What's the craziest weather you've been out in?

Gus:    Well, we got the James R. Barker departing in December 2019 with some really crazy waves that was super cool, and it was super windy out, but that was really cool to see her leave.

What boat has the best salute on the lakes, do you think? 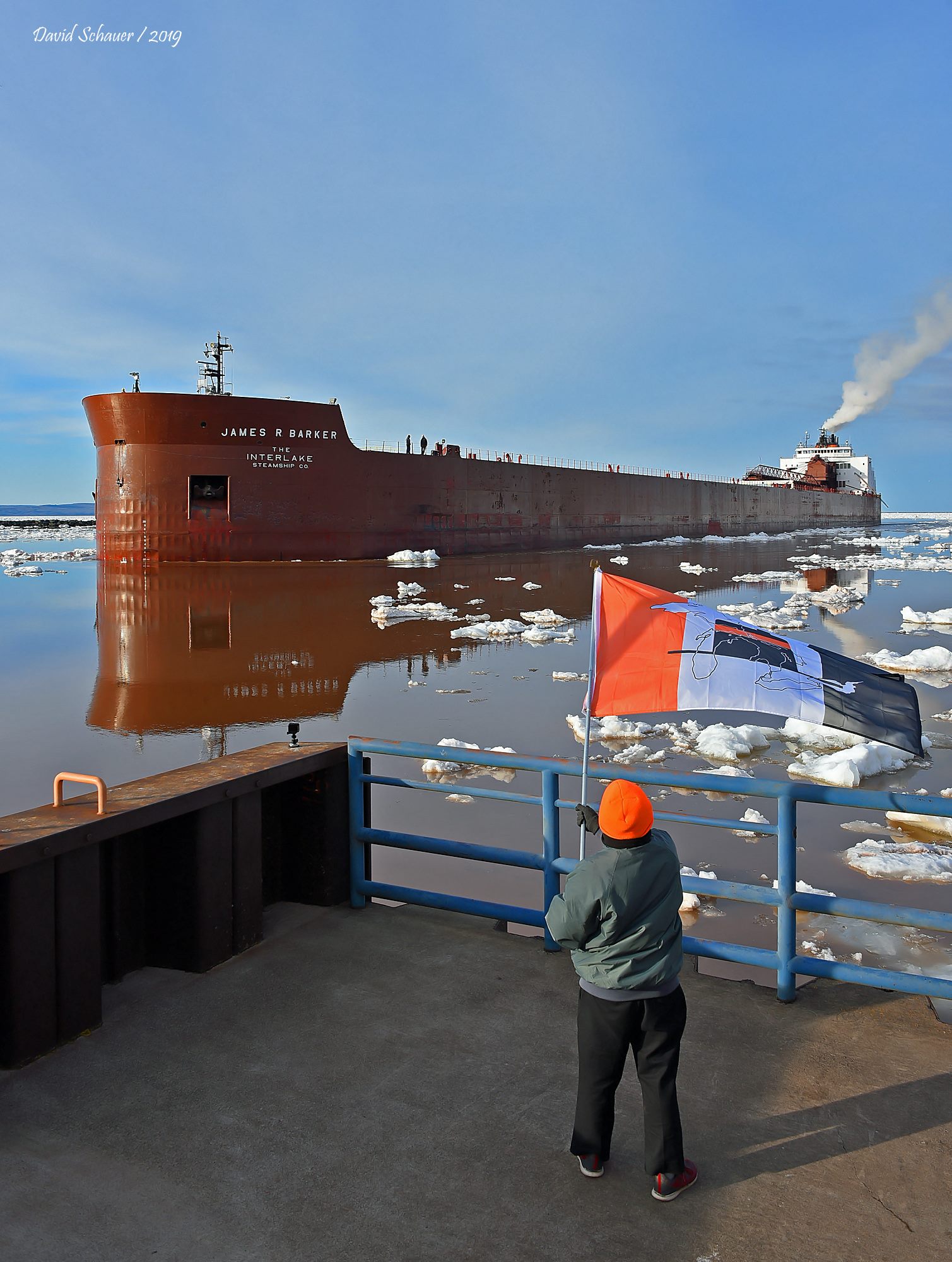 Do you consider yourself a boat nerd?

Do you think of that as a term of endearment, not like somebody's making fun of you, right?

Gus:    No, I just think that's what you do and that's just what you call someone who likes boats a lot.

What do you do with all your photos?

Gus:    Well, my mom, when we get a really cool boat picture, she likes to have them on her wall in her office.

So this has got to be a fun hobby for you and your dad to do together and it's probably made you guys pretty close, huh?

Gus:    Yeah. The father son relationship, when we're always out together, is nice to have.

Do you want to do anything with photography as you get older or you just want to keep it being a hobby?

Gus:    I might go professional, but for the time being, I'd like to keep it as a hobby. 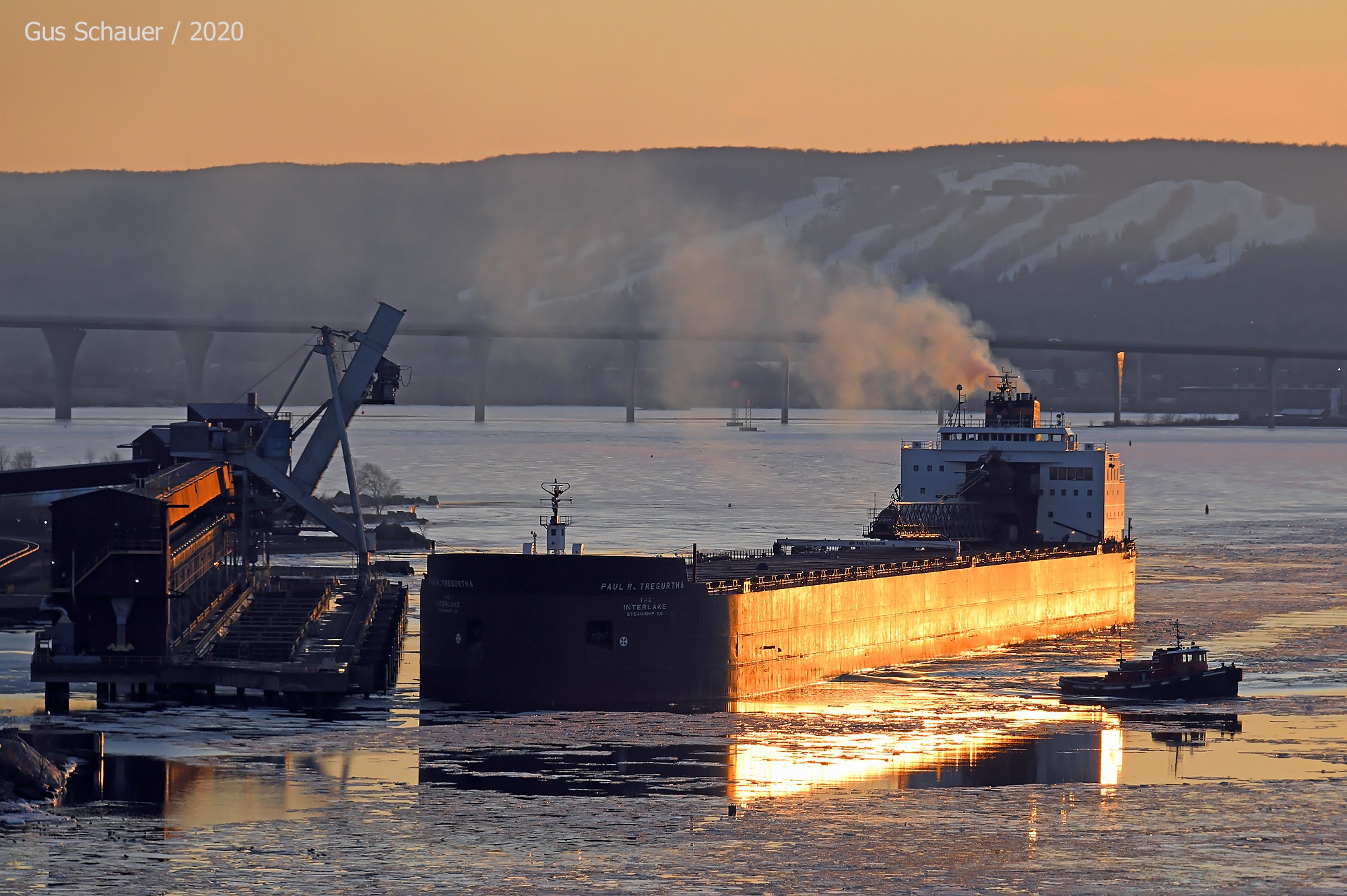